Thanks to Loughton Folk Club, Essex UK for this review

Singer/guitarist/songwriter Richard is a giant on the folk scene. He is a dynamic performer who writes unforgettable wonderful songs. His songs have been covered widely by artists on the folk scene and beyond it. Born in Middlesbrough, Richard started playing in the North East folk clubs and joined the Teeside Fettlers in 1981. He released his fist solo record on Fellside in 1984. He has made numerous albums since, including duo records with Dick Miles and Chris Parkinson.  His latest CD 'Hard Road to Prospect Hill', released in October 2015 is a classic. His song 'Scarborough Fishermen' is widely regarded as one of the greatest English folk songs ever written. Richard is one of the finest performers on the folk circuit. A night to remember.

'My cup overflowed with the many Yorkshire yarns that Richard spun and wove for us in a land on the other side of the world, yet connected to this whenua through Captain Cook and the Endeavour, which was built in Whitby before voyaging to New Zealand and  Hawkes Bay.  I felt I came home for the night – the part of my heart that I left in Yorkshire skipped a beat or two'.

The arrival in Whitby of the Australian built ‘Endeavour‘ replica in 1997 was the inspiration for the creation of ‘Eye Of The Wind’, a musical play written by folk musician and song-writer, Richard Grainger.
He was already well-known for his songs about his native Teesside, the Yorkshire Coast and Whitby, having penned notable folk songs such as The Whitby Whaler and Old Whitby Town, some years before.
A few years before the vessel's arrival, in 1994, he founded the Captain Cook (Maritime Music) Festival and was later to organise all the musical events for the Endeavour Homecoming Festival in 1997.
‘I knew that this demanded something special, and so I put together this musical play and invited musicians and singers to take part. We had the popular groups Stormalong John from Liverpool and The Keelers from Tyneside plus Mike Waterson from Robin Hoods Bay, among others, to perform the songs.' The play has since been performed around the north of England including Middlesbrough Town Hall, Scarborough Spa Theatre and many other locations.
When the Endeavour returned from Australia in 2003, Richard was again involved and was asked by the BBC to record the play for radio, and it was broadcast on the day the vessel sailed up the River Tees to Middlesbrough, close to Cooks birthplace of Marton in Cleveland.
Sir David Attenborough, himself a fan of Cook and his achievements, added his weight to the production by agreeing to read the narrative. The CD of the same name, including David Attenborough’s narrative was released that year.
Richard added: ’I invited Sir David to be involved in the forthcoming special production for the 250th anniversary but regretfully his programme - making schedule is so tightly packed this summer that he has been unable accept the invitation. He has, however, wished us the best of luck, and I am sure our excellent narrators will do him proud.
On July 5th the latest version of the play will play for one night only at Whitby Pavilion Theatre. This time, with a host of Whitby and Yorkshire based actors, musicians and singers, including young students from Eskdale School, it will be the community's celebration of Cook and an opportunity to honour the great navigator's achievements.
Co Directed by popular local actor, Ivan Hall, the play tells the story of Cook's rise from farm labourer's son to be the last of the great navigators and the first great scientific explorer .
The show kicks off the 'Cook250 Celebrations', which start the following day July 6th with music, cookery demonstrations and a multitude of events all around the town until Sunday evening July 8th.
The musicians included in this new production include Graham Brotton (Double Bass), Bob Butterfield (Woodwind), Moira Clarke (Melodeon), Richard Grainger (Vocal & guitar), Marilla Homes (Vocal), Jerry Simon (Fiddle) and Wendy Somerville-Woodiwis (Cello).
All the actors are Whitby-based and include Ivan Hall (Joseph Banks), John Eaves (James Cook), Sam Gower (Young James), Fiona Organ (Mrs Cook), Josh Spence (Young Nick), Jon Risden (Mr Sanderson).
Tickets are on sale via the Whitby Pavilion website or in person at the Theatre Box Office. 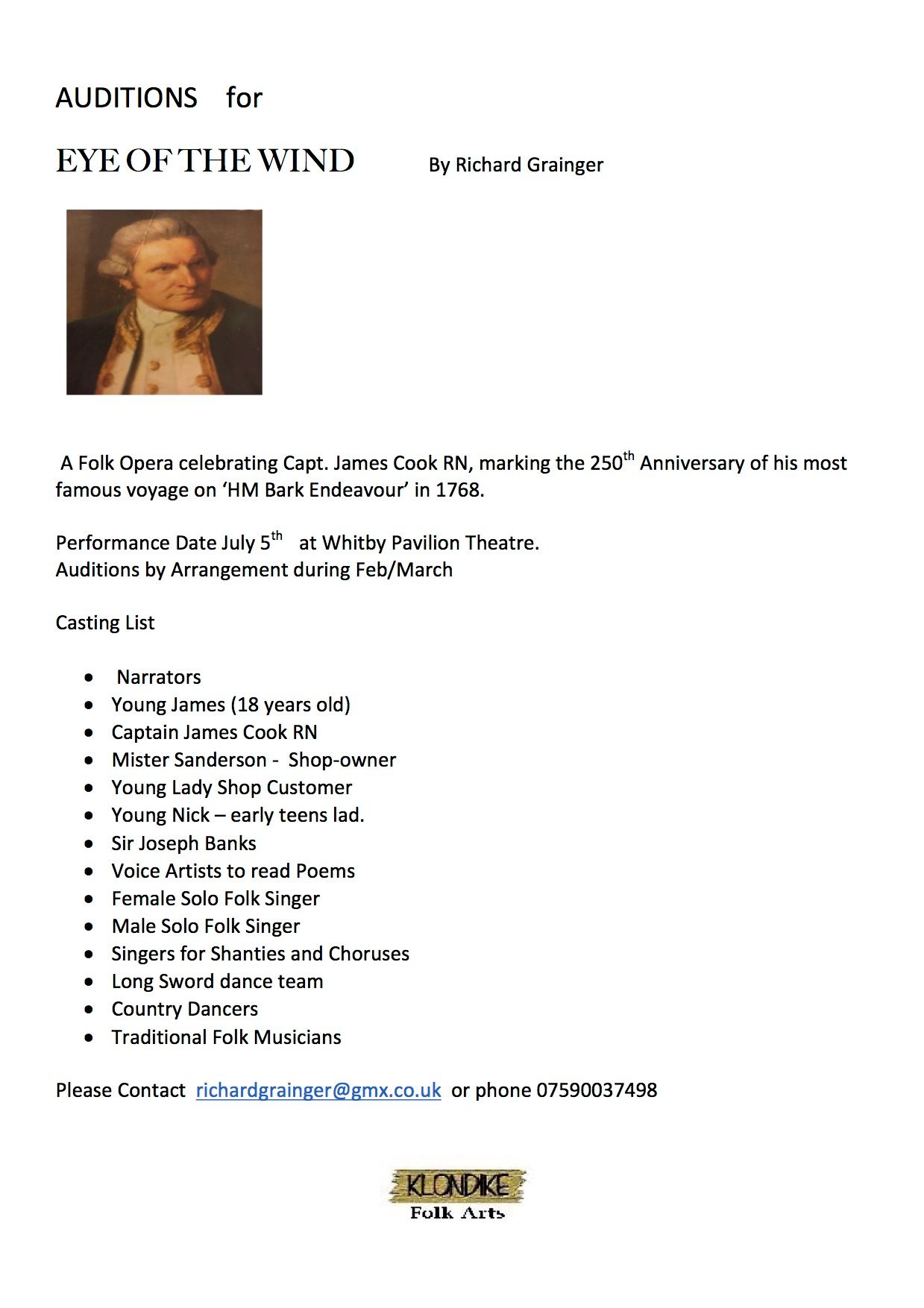 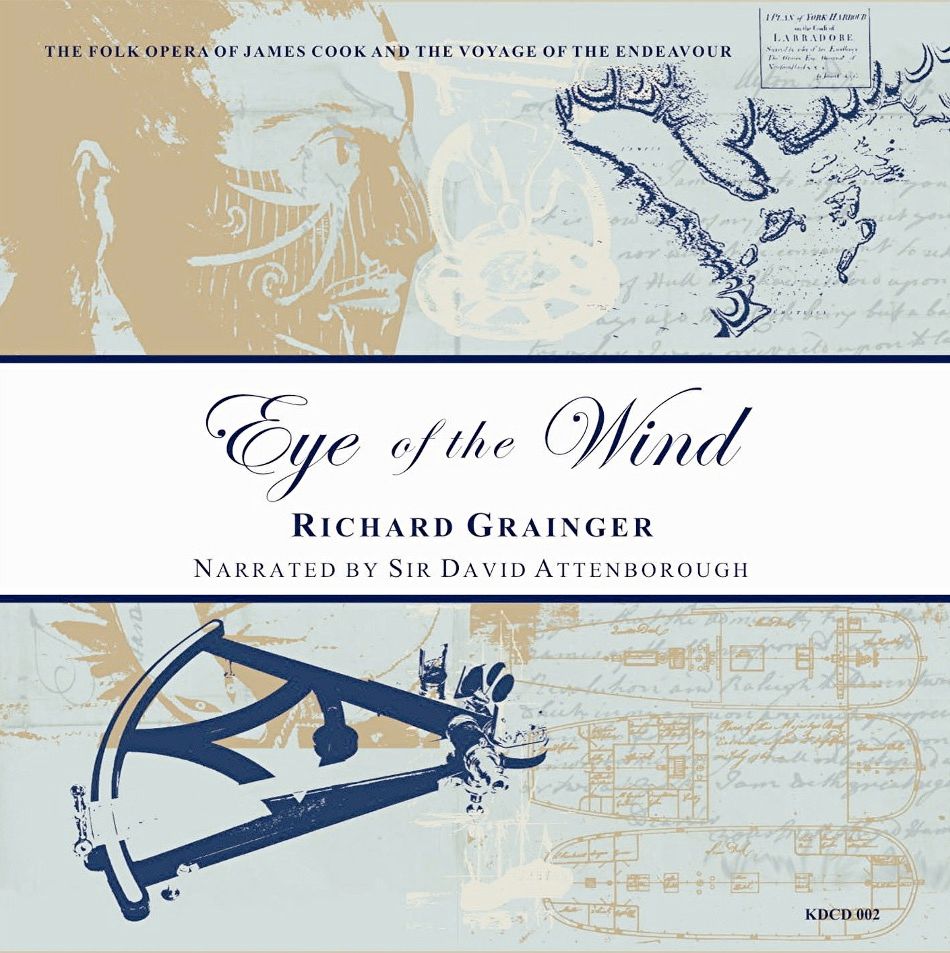 ITV 1 in the UK presents a new series of ' Coastal Lives' with Robson Greene. On the 17th October Robson visits Whitby and speaks to Richard who will sing his song The Whitby Whaler, followed by a spot together performing 'The Endeavour Shanty' joined by The Endeavour Singers, ( Tony O Neil,Helen Pitt, Steve Dawes and Graham Brotton).

I recently recorded two songs for a new TV Show hosted by Robson Greene. 'People Of The Coast' to be screened on September 11th on ITV Gold. Befitting his visit to Whitby  I sang 'Whitby Whaler'  and 'Endeavour Shanty' the latter with Robson taking a verse or two.

I was accompanied by Graham Brotton on Double Bass and strong vocal support from Steve Dawes Tony O'Neil and Helen Pitt.

We had a great time with Robson he's a charming fella,  and all the ITV staff. 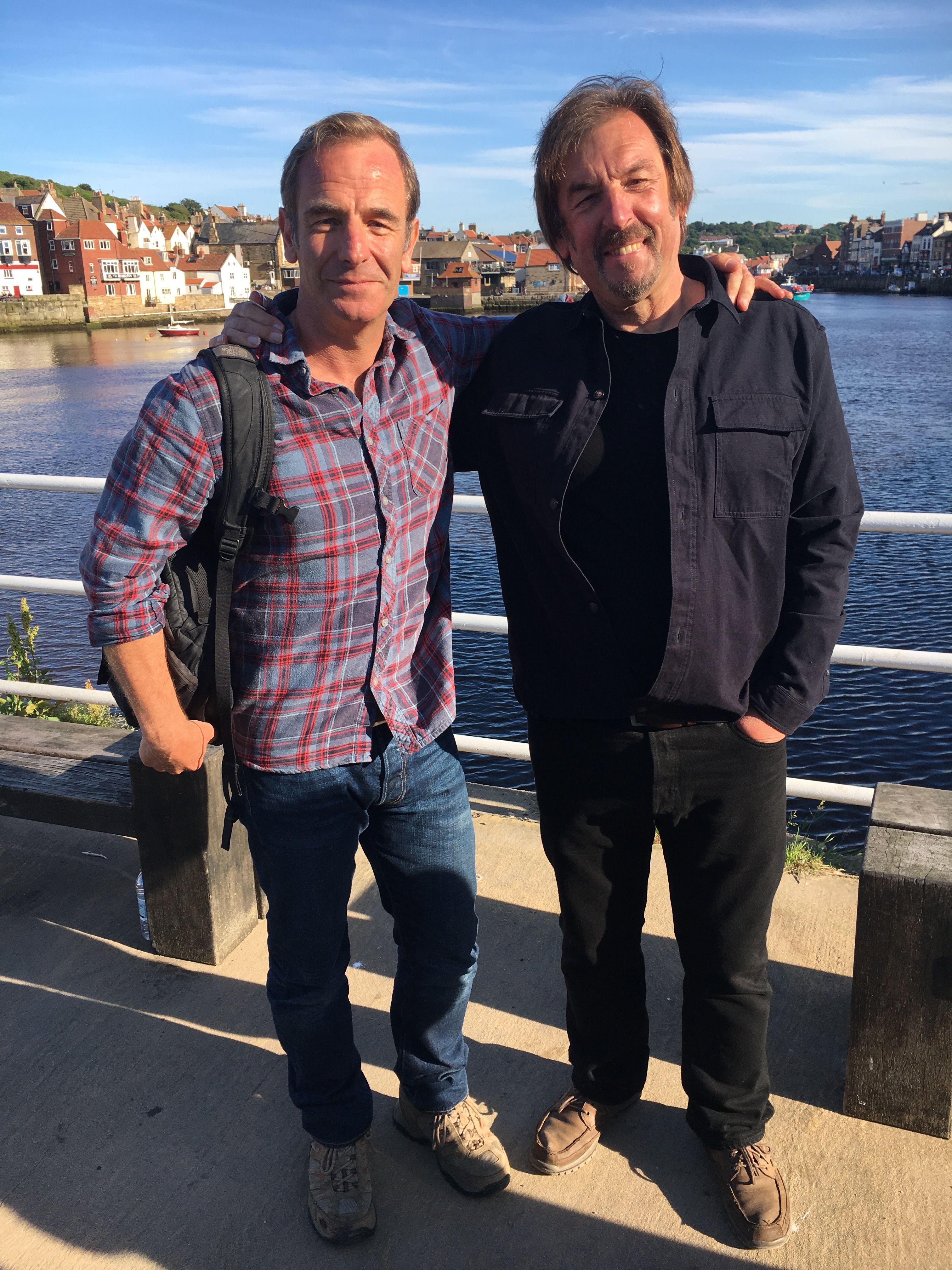